Did you know that there are people who sleep with absolutely nothing on at all?

Princess Ann’s wish to do away with convention in this 1952 film reflects changes in women’s fashion, and in attitudes to clothes worn in bed.  Whereas in previous centuries men and women slept in their underwear, in the twentieth century the distinction between outerwear and clothes for sleeping became blurred.  Pyjamas (previously worn only by men) became a fashion statement for women.  Models and high-society women were photographed relaxing at home in silk lounge pyjamas, or wearing the popular “beach-pyjamas” at public resorts.

In the film Roman Holiday (1952) the young Princess Ann (Audrey Hepburn) complains that her nightdresses are frumpy.  She longs for fun, fashion and freedom.

Countess: My dear, you have lovely things.

Princess Ann: But I’m not two hundred years old.  Why can’t I sleep in pyjamas?

Princess Ann: Just the top part. Did you know that there are people who sleep with absolutely nothing on at all?

Countess: I rejoice to say I do not.

The princess gets her wish when a reporter, Joe Bradley (Gregory Peck), finds her asleep on a bench in the middle of the night.  Unable to wake her, Bradley takes her back to his apartment where he lends her a pair of his pyjamas.

Pyjamas were not worn in bed by men or women until the nineteenth century. Before that time, people went to bed wearing their underwear, or something similar.

This picture of a husband and wife in bed was printed in the 1600s. It is comic because the wife is giving a “lecture” while the husband is pretending to sleep!

It also gives us an idea of what people wore in bed four hundred years ago. The wife is wearing a “night rayle” – a kind of shawl that tied at the neck to keep women warm as they sat up in bed. Both have their heads covered. The husband is wearing a nightcap, the wife a kind of head covering called a coif.

Confusingly, clothes called “night clothes”, such as nightcaps and nightgowns, did not always refer to clothes worn in bed. They could refer to an informal type of dress that men and women wore at home in the evening after they had taken off their day clothes.

Wealthy men and women wore nightcaps and gowns elaborately embroidered with silk thread. These fashionable and expensive garments were intended to be seen by visitors, unlike the plain clothes worn in bed.

Covering the head was thought to be particularly important when asleep in bed to protect the brain from the cold and the rays of the moon. Nightcaps and coifs for wearing in bed were plainer in style. They were made of linen, checked fabric or a coarse cotton fabric called calico.

One of the reasons for covering the head while sleeping was that the rays of the moon were believed to cause diseases.

Young Victoria receives the news that she has become Queen after her uncle’s death in 1832.  The news is so unexpected that she is still in her nightgown.

Most of the examples of night-clothes or undergarments that have survived from previous centuries were kept by families because they had some kind of sentimental value or had been worn by an important person – including some thought to have been worn by royalty.

Queen Victoria gifted her nightwear and underwear to members of the royal household. These sometimes come up for auction, embroidered with the Queen’s cipher VR (Victoria Regina). The Museum of London and Dunster Castle in Somerset each own one of Queen Victoria’s nightdresses.

The nightcap liner below, now kept in the Victoria and Albert Museum, has a letter ‘C’ embroidered inside the rim. It was owed by the Chafyn-Grove family of Wiltshire, who were strong Royalists during the English Civil War. According to family tradition, the nightcap liner had been worn by Charles I, who stayed at their house before his execution.

Luxury must be comfortable, otherwise it is not luxury.

In the early twentieth century women’s fashion, both day-wear and night-wear, was transformed by French designer Coco Chanel. Chanel held that clothes should be elegant, comfortable and functional.

High-class women stripped off tight-fitting corsets and long cotton nightdresses. Models and film stars were photographed lounging in silk pyjamas, or at the beach in wide-legged beach pyjamas. Both were designs introduced by Chanel.

Claudette Colbert and Clark Gable, It Happened One Night, 1934.  Directed by Frank Capra for Columbia Pictures.

You can see nightcaps and nightgowns, including some of the ones pictured in this post, in the Victoria and Albert Museum in London.  Or browse the collections online here.

A riveting look at sleep c. 1600-1800.  Find stories and pictures of bedrooms, bed sheets, nightcaps, insomnia treatments and much more.  Available from Waterstones and Amazon.

Many books have been written about Coco Chanel.  See, for instance, Mademoiselle: Coco Chanel and the Pulse of History and the recent photographic biography Living with Coco Chanel: The Homes and Landscapes that Shaped the Designer.

Knit your very own Victorian nightcap. Download this free pattern based on an 1830s design. 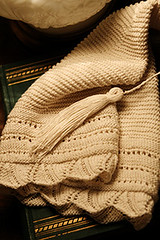 View all posts by elizabethhunterqmul